Shrivardhan is a taluka, and city and a municipal council in Raigad district in the Indian state of Maharashtra. It has developed into a seaside resort, along with the nearby town of Harihareshwar, which also has a Shiva temple. Shrivardhan town itself does have many beaches (Its a Peninsula) – also there are other beautiful beach destinations nearby – like Diveagar Beach and Kondivali beach. People from across Maharashtra come to Shrivardhan and the nearby beaches all round the year.

Srivardhan (taluka) is an ancient place of historical importance and is mentioned as being visited by Arjuna Pandav in his pilgrimage. It is well known place for traders in the past. In sixteenth and seventeenth centuries under Ahmadnagar and afterwards under Bijapur shrivardhan was a port of consequence. It appears in the accounts of leading European travellers as Ziffardan. In 1538 Dom Joao de Castro described it as with little water in the pier at low tide but inside large and roomy. It is notable as the birthplace of Balaji Visvanath (attached monument in Srivardhan), the first Pesva (1713–1720) who was the Desmukh of the town. In 1713 Srivardhan was one of the sixteen fortified places in the Konkan ceded by Balaji Visvanath Pesva to Kanhoji Angre of Kolaba. Balaji was the first Peshwa of Maratha Empire appointed by Chattrapati Shahu, grandson of Chhatrapati Shivaji.

Harihareshwar is a town in Raigad district, in Maharashtra, India. It is surrounded by four hills named Harihareshwar, Harshinachal, Bramhadri and Pushpadri. The river Savitri enters the Arabian Sea from the town of Harihareshwar. Towards the north of the town is the temple of Lord Harihareshwar, said to have been blessed by Lord Shiva. Hence Harihareshwar is often referred to as Dev-ghar or “house of God”.

Besides a major pilgrimage center, Harihareshwar is a popular beach resort with two beaches, one to the north and the other to the south of the temple. Maharashtra Tourism Development Corporation has a resort on the south beach. Harihareshwar, along with Shrivardhan and Diveagar Beach forms a popular weekend beach destination from Pune (190 km) and Mumbai (210 km).

Murud-Janjira is the local name for a fort situated at the coastal village of Murud, in the Raigad district of Maharashtra, India.

Murud-Janjira Fort is situated on an oval-shaped rock off the Arabian Sea coast near the port town of Murud, 165 km (103 mi) south of Mumbai. Janjira is considered one of the strongest marine forts in India. The fort is approached by sailboats from Rajapuri jetty. The main gate of the fort faces Rajapuri on the shore and can be seen only when one is quite close to it. It has a small postern gate towards the open sea for escape.

The fort has 19 rounded bastions, still intact. There are many cannons of native and European make rusting on the bastions. Now in ruins, the fort in its heyday was a full-fledged living fort with all the necessary facilities, e.g., palaces, quarters for officers, mosque, two big fresh water tank, etc. On the outer wall flanking the main gate, there is a sculpture depicting a tiger-like beast clasping elephants in its claws. There are prominent “ASHOK-CHAKRAS” on all major gates of the fort Janjira. There are images of playing elephants, lions etc. 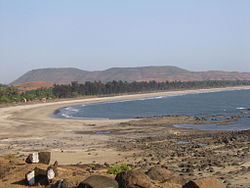 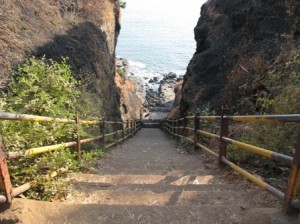 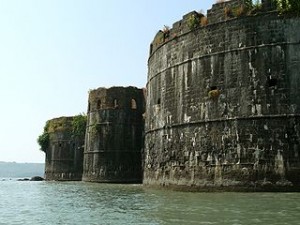